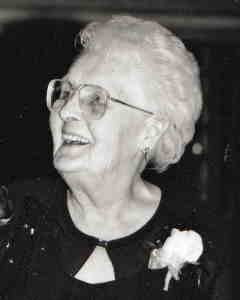 Edna Arlandson-Sandquist, age 99, of Lafayette, passed away Sunday, November 24, 2019, at the Ridgeway Assisted Living Center in New Ulm, Minnesota. Memorial service were held on Sunday, December 1, 2019, 2:00 p.m. at First Lutheran Church in Lafayette with interment at a later date. Clergy officiating was Pastor Heidi Hagstrom. Organist was Laurie Larson. Soloist was Heidi Hagstrom, “Children Of The Heavenly Father” in Swedish. Congregational Hymns sung were “I Love To Tell The Story”, “Children Of The Heavenly Father”, “Open My Eyes That I May See”, “Thy Holy Wings”, and “Great Is Thy Faithfulness.” Urn bearer was Grandson, John Roy Arlandson. Edna is survived by her son, John Arlandson and his wife, Karen of Lafayette, MN; grandchildren, John R. Arlandson and his wife, Martha of Birchwood, MN, Christopher Arlandson of St. Paul, MN, Scott Arlandson and his wife, Alesia of Rosemount, MN, and Dawn Schwab and her husband, Christopher of Rosemount, MN; 11 great-grandchildren; sister, Elaine Savela of Fairfax, MN; sisters in law Kathy (Mrs. Ralph) Kent and Jean (Mrs. David) Kent; nieces, nephews, other relatives and friends. Edna was preceded in death by her parents, Sigfred and Cecelia Kent; first husband, Roy Arlandson; second husband, Donald Sandquist; brothers, Kenneth Kent, LuVerne Kent, Ralph Kent, and David Kent. Edna Vivian Sandquist was born on October 11, 1920, in Gibbon, Minnesota. She was the daughter of Sigfred and Cecelia (Holmgren) Kent. Edna was baptized as an infant and was later confirmed in her faith as a youth. She received her education in Gibbon and was a graduate of the Gibbon High School. Edna grew up in Gibbon and resided in Lafayette all of her married life. On September 19, 1940, Edna was united in marriage to Roy Arlandson at Clear Lake Swedish Church, rural Gibbon. This union was blessed with one son, John. Roy and Edna purchased the hardware store in Lafayette. Roy Arlandson passed away in March of 1964, after which Edna continued living in Lafayette. On November 11, 1966, Edna was united in marriage to Donald Sandquist at Bernadotte Lutheran Church in Bernadotte Township, Nicollet County, Minnesota. After their marriage, the couple lived on a farm north of Lafayette. Edna was a member of First Lutheran Church in Lafayette and a member of the Ladies Aid. She participated in all church activities. Edna was also a member of the American Legion Auxiliary in Lafayette. Edna enjoyed embroidering towels, making Halloween costumes for her grandchildren, quilting at church, playing cards, taking road trips, and traveling to warm states with family. She always had a project going. Edna was very proud of her Swedish heritage and enjoyed baking Swedish dishes and desserts. Edna enjoyed daily coffee with her friends in Lafayette. When she needed assistance with her daily care, Edna became a resident of the Lafayette Good Samaritan Center for one year and then moved to Ridgeway on 23rd Assisted Living in New Ulm. She passed away there on Sunday, November 24, 2019, at the age of 99 years. Blessed be her memory. Arrangements by Dalin-Hantge Funeral Chapel in Winthrop, Minnesota. Online obituaries and guest book available at www.hantge.com<http://www.hantge.com/> Please click on obituaries and guest book.