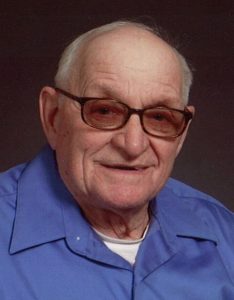 Ernest “Ernie” Chouanard, age 88 of Winthrop, passed away at home surrounded by family on Friday, December 6, 2019. Memorial mass will be 10:30am Saturday, December 14, 2019 at the Church of St. Peter in St. Peter. Visitation will be 4:00-7:00 p.m. Friday and 9:30 a.m. Saturday all at the church. Condolences can be left at www.saintpeterfuneralhome.com. Left to remember Ernie are his wife, Karen; children: Barbara Robinson, Donna Barnett, Scot (Lidiya), Julie Kaveney, Rick (Amie) and Jacki; 16 grandchildren; 13 great grandchildren; and other relatives and friends. He was preceded in death by his brother Harold (Mary) Chouanard and beloved pet Mackenzie. Ernest William was born October 18, 1931 in St. Peter to Arthur and Leona (Boucher) Chouanard. He attended schools in St. Peter and St. Paul. After school, he worked for his uncle on the farm near Le Sueur. In 1952, he enlisted in the US Army, serving 2 years before being honorably discharged. He then returned home to work with his uncle. On April 8, 1961 he was united in marriage to Karen Salisbury in Lafayette. He began working at the St. Peter Creamery (later becoming the Le Sueur Cheese Company) for over 30 years. Ernie and Karen made their home in rural Winthrop and were members of St. Michael’s Catholic Church in Gaylord. He enjoyed tinkering in the garage, watching westerns, the mountains, chocolate candy, Dr. Pepper and most importantly time with his children, grandchildren and great grandchildren.