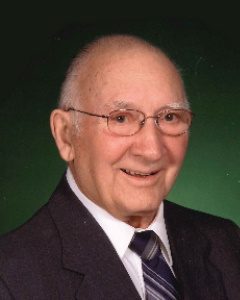 James Essler, 87, of Hutchinson, Minnesota, passed away on Monday, December 30, 2019, at Woodstone Senior Living Community in Hutchinson. A family service will be held at a later date. Jim is survived by his daughters, Diane Rannow and her husband, Tom of Hutchinson, MN, and Carol Essler Helgeson and her husband, Greg of South Padre Island, TX; grandchildren, Michelle Nicklow and her husband, Mark of Savage, MN, Melanie Rannow of Charlotte, NC, Melissa McKirahan and her husband, Mike of Minnetonka, MN, Candice Peters and her friend, Tyler of Mankato, MN, Jesse Buche of Jacksonville, FL, and Jent Buche and his wife, Paola of South Padre Island, TX; great-grandchildren, Skylar, Caitlyn, Aiden and Caleb McKirahan, Rylan Rannow, Caidyn Peters, Jill Buche, Jent Jr., Kora and Kami Buche; sister, Rosie Reznecheck of Willmar, MN;brothers-in-law, Fridolin (Fritz) Olberding and his wife, Lucy of Shawnee Mission, KS, George Olberding of Tucson, AZ, and Wayne Meyer of Meire Grove, MN; nieces, nephews, other relatives and friends. Jim was preceded in death by his parents, Jacob and Mathilda Essler; wife, Lillian Olberding; son, Rodney Essler; grandson, Justin Buche; sisters, Linda Lou Essler and Cleone Essler; brothers-in-law, James Reznecheck and Alcuin Kulzer; sisters-in-law, Ruth Olberding and Angeline (Angie) Kulzer Meyer; brothers-in-law and sisters-in-law, Leonard and Hilda Olberding, Arthur and Angie Olberding, and Edmund and Bea Olberding. James (Jim) Essler was born on January 6, 1932, in Padua, Minnesota. He was the son of Jacob and Mathilda (Steinhoff) Essler. Jim joined the National Guard in January of 1949 and was in active service from January 16, 1951 through September 14, 1952. Jim was on the Winthrop Fire Department for 21 years from 1969-1990. He was a member of the Knights of Columbus and the American Legion in Winthrop. Jim married Lillian Olberding on September 1, 1954; they celebrated 50 years of marriage before Lil passed away in 2005. Jim went to dry cleaning school in Silver Springs, Maryland, and worked at White Way Cleaners in Minneapolis, Minnesota, from 1954-1965. In 1965, Jim and Lil moved to Winthrop, Minnesota, and bought a 3.2 bar and owned and operated it as Jim’s Tavern. In 1977 it became an on and off sale liquor store and bar and the name was changed to Essler’s Bar. In 1993 they sold the bar and retired in Cold Spring, Minnesota. Jim also drove school bus for Winthrop School from 1965-1993. They moved back to Winthrop in 1998. Jim enjoyed hunting, fishing, woodworking, playing cards, motorcycling and camping. He cherished the time he spent with his family, especially with the grandchildren. Jim moved to Woodstone Senior Living Community in May of 2018, when his health started to decline. He passed away there on Monday, December 30, 2019, at the age of 87 years. Blessed be his memory. Arrangements by the Dalin-Hantge Chapels in Winthrop. Online Obituaries and Guest Book available at www.hantge.com.