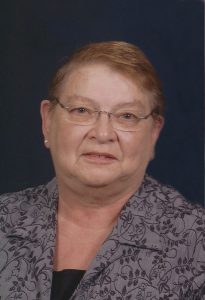 Janet Evenson, age 78 died peacefully at her home in rural Gibbon on Wednesday, February 19, 2020, with her family by her side after a hard-fought battle with pancreatic cancer. Mass of Christian burial was held at 11 a.m. on Monday, February 24, 2020, at St. Willibrord’s Catholic Church in Gibbon. Father Bruno Santiago celebrated the Mass, and burial followed in the St. Willibrord Catholic Cemetery in rural Gibbon. Visitation was held from 2-6 p.m. on Sunday at the Minnesota Valley Funeral Home in Gibbon. Visitation continued from 10-11 a.m. on Monday at St. Willibrord’s Catholic Church in Gibbon. To leave an online condolence for her family, or to sign the guestbook, go to: mvfh.org Janet is survived by her daughters, Mary (Javad) Baradaran of Burnsville, Deb (Mark) Huiras of Fairfax, Tina (Chris) Nachreiner of Gibbon; her sons, Jim (Naomi) Evenson of Gibbon, Scott (Paula) Evenson of Sartell, Mike (Teresa) Evenson of Gibbon; 14 grandchildren, James, John Baradaran, Josh, Alicia (fiancé Josh Bungum), Matthew, Philip Evenson, Bailey Evenson, Nolan, Claire, Reeve Huiras, Ella, Sofia Nachreiner, Jamie (Mason Bleick) and Clayton Evenson, one great grandchild due in May; her siblings, Jerry (Mary) Sellner of Sleepy Eye, Dave (Kathy) Sellner of Sleepy Eye, Grace (Dale) Hoeper of Madelia, Vince (Judi) Sellner of Sleepy Eye; brother-in-law, Barney Binder of Gibbon; and many nieces, nephews, relatives, and friends. She was preceded in death by her parents, Norb and Leona Sellner; her husband Reynold, who passed in 2018; and her sister-in-law, Mabel Binder. Janet Rose Sellner was born September 27, 1941, in Sleepy Eye to Norbert and Leona (Nachreiner) Sellner. She grew up on the family farm, attended country school, and graduated from St. Mary’s High School in 1959. Janet continued her education and went on for nurse’s aide training in New Ulm. Janet met Reynold at the Loretto Hospital in 1961, and the patient became the husband on June 9, 1962. The couple enjoyed 55 beautiful years of marriage. Janet lived in New Ulm until 1975 when they moved the family to the farm in Gibbon. While in New Ulm, Janet provided care at the Loretto Hospital for newborns. Later she worked at Highland Manor, and the Fairfax Nursing Home sharing her good humored, compassionate and common sense care to the residents until she retired in 2010. Janet spent 55 years of service in the health care field making a difference in countless individual’s lives. She was a devout member of St. Willibrord’s Catholic Church in Gibbon. Janet was a lover of life. She greatly enjoyed simple pleasures like planning her garden in the deep of winter, tending it all summer and harvesting in the fall. Many a Mason jar passed through her kitchen during the wonderful chaos of canning in August. She enjoyed perusing her collections of cookbooks and using her creativity to make magic happen in the kitchen. Nobody was ever disappointed with her cooking or baking; especially those famous cinnamon rolls of hers. If you met Janet once, you loved her forever. Warm and sincere, she was the real deal where it concerned being a wife, mother, grandmother, sister, aunt, and friend. She enjoyed close relationships with siblings and in-laws who turned out to be not only family, but dear friends as well. Friends she truly had by the dozens. They would say she was easy to talk with, fun to be around, and ever ready with a warm smile. You may have seen her at Jackpot having a good time with these same friends or family. Every single one of her 14 grandchildren adored her easy going and sometimes mischievous grandparenting style. They knew that visiting grandma meant some delicious home cooked food and the run of the house. She didn’t even make the kids clean up; that’s how much of a softie she was for them. In turn, she couldn’t have been more proud of all her grandkids, frequently sharing their accomplishments with others. If a life can be measured by those who love you when you leave, Janet has surpassed all expectations and everyone who knew her will never forget her genuine kindness and warmth. She will be truly and deeply missed. Mvfh.org