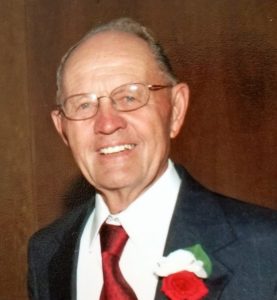 Duane Andrew Nelsen was born on July 18, 1932 to M. Axel and Helen (Jordahl) Nelsen in Garretson, South Dakota. He attended school in Garretson until the 8th grade, when he began farming full time with his father. Prior to completing his education, Duane would often deliver milk and cream for the family’s dairy before going to school. He worked hard his entire life, milking cows for 50 years and always raised several hundreds of cattle for the sale barn. Duane was united in marriage to Irma Mohrman at the First English Church in Marshall, Minnesota on December 23, 1951. The couple was blessed with four children and nearly 70 years of marriage. Duane and his children continued to raise cattle and farm to support the animals until he officially retired at the age of 86, though he was still more than willing to lend a helping hand. He continued to live on his farm until his passing on Friday, August 21, 2020 at the age of 88 years, one month, and three days. He was a member of First English Lutheran Church in Tyler, Minnesota. Duane was a hardworking man of God and devoted himself to his Lord and Savior. During their youth, Duane and Irma enjoyed dancing, especially at the Showboat in Lake Benton, Minnesota and the Hollyhock in Hatfield, Minnesota. Duane was a people person and also an animal lover, having a special bond with animals that would ride with him on the tractor and the four wheeler. He loved his family fiercely and will be greatly missed. Duane is survived by his beloved wife, Irma; their children, Bev (Don) Roller of Tyler, Kristi (Merlin) Thompson of Sioux Falls, South Dakota, and Paul Nelsen of Lake Benton; seven grandchildren, Rick Jordahl, Trudy Jordahl, Priscilla (Josh) Osland, Matt (Chandra) Prosch, Josh (Nikki) Prosch, Christopher Prosch, Marquette (Cole) Nordmeyer; nine great-grandchildren; one brother, Lowell Nelsen of Lake Benton; and many loving family and friends. He was preceded in death by his son, Mark Nelsen; his grandchildren, Cassie Nelsen and Nick Nelsen; his parents; and his sisters, Darlene Holt and Veryl Jean Eagan.