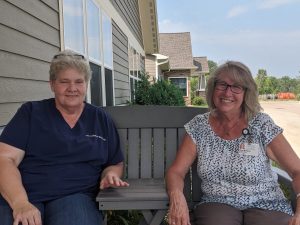 Judy Ross and Pam Morson have been serving residents in Lafayette and Winthrop at the nursing homes and assisted living facilities for a combined 85 years. They currently work at The Lodge in Winthrop. Ross got her start at the age of 15. She wasn’t supposed to start until she was 16 but her sister was in a car accident and couldn’t work so they called Judy in early to take over. They didn’t think she would last over a week until she quit. She is still serving the elderly 45 years later. “I like the people,” she said of what has kept her going so long. “They’re fun. They teach you a lot of stuff. They become your other family. Sometimes you’re here more than you are at home.

For the complete story, check out the August 26 issue of the Winthrop News.