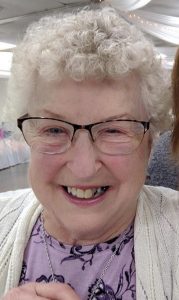 Bernice R. A. Schultz, age 85 of Rush River, west of Le Sueur, passed away on Tuesday, Nov. 10, 2020. A celebration of Life will be on Monday, Nov. 16 at the Kolden Funeral Home in Le Sueur. This gathering is by invitation only due to COVID restrictions, face masks and social distancing will be observed. Bernice is survived by her children, Garry Schultz of Le Sueur, (Rush River), MN, Linda (Jon Segerstrom) Schultz of Cary, NC, Ronald (Marie) Schultz of Le Sueur, MN, Sandra (Ted) Garcera of N. Mankato, MN and Robert (Lisa) Schultz of St. Peter, MN; grandchildren, Nicole Segerstrom, Kara Segerstrom, Ryan Segerstrom, Jessica (Michael) Wills, Michael (Ashley) Schultz, Adam (Elizabeth Olsson) Schultz, Chelsea (Anthony) Cemenski, Hannah (Joshua) Plonsky, Krystalin (Ryan) Brockberg, Katalin Schmidt, Kelsey Schmidt, Kenneth Schmidt Jr. and Kole Schmidt; 12 great-grandchildren, cousins, Sandra Ulrich of Winthrop, MN and Ulla Murray of Tucsan, AZ She was preceded in death by her husband, parents and granddaughter, Kaylin Schmidt. Bernice was born on February 11, 1935, to Herbert and Mabel (Soderland) Falk at the family farm in Bernadotte Township in Sibley County. She attended a country school at the age of 7 where she had to learn English since her family only spoke Swedish at home. Bernice rode the plow horse to school and after dropping her off, would give it a pat to send it back home. In 1941, Bernice’s family bought a Model A Ford where she was the first to drive it and found out it had no brakes! Bernice graduated from Winthrop High School in 1952 and began working as a bank teller in Winthrop. She met her future husband, Kenneth Ernest Schultz, at a dance just before he was drafted for the Korean War. He returned home in August 1956 and proposed to Bernice. They were married Sept. 15, 1956 at the Bernadotte Lutheran Church, Lafayette, MN. After living a short time in Winthrop, in 1958, they moved to Henderson Township, Sibley County where they farmed until moving to the family farms at Rush River in 1988. Bernice worked 40+ years as a bank teller at Valley National/First Farmers & Merchant Bank in Le Sueur. She enjoyed cooking, painting and fishing. Memorials preferred in lieu of flowers.