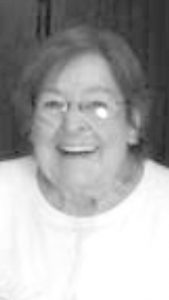 Jayne H. Blumhoefer, age 83 of Redwood Falls passed away Wednesday, December 30, 2020 at the Carris Health Redwood Seasons Hospice House in Redwood Falls. A private memorial service will be held. The funeral service will be livestreamed through the Minnesota Valley Funeral Home’s Facebook page starting at 1 p.m. on Thursday. She is survived by her family; Jackie and Chuck Anderson, Lee Ann Blumhoefer, Steve Blumhoefer and Liliana Labrador, Matt and Sue Blumhoefer, Warren and Mandy Blumhoefer, and Jim Blumhoefer, ten grandchildren and seven very special great grandchildren. She was preceded in death by her daughter, Georgina, grandson, Jason Kienlen, her parents and her brothers, Glenn and Arlen. Jayne Helen Blumhoefer was born on Grandpa Joe’s farm south of Morton, MN on December 4th, 1937 to Warren and Helen Jacobus Barrett. She grew up in northern Minnesota and attended Dyckman School District 25. She graduated from Willmar High School on June 4th, 1955. Jayne married Philip Blumhoefer in 1966 and together they raised 7 children on the family farm north of Fairfax. While raising their children, she taught them many lifelong skills such as sewing, cooking, baking, and canning. The kids and Jayne spent hours in the garden and enjoyed the fruits of the labor all year long. Philip and Jayne shared 35 years of marriage. Jayne had a love for reading and shared that passion through her work at the Fairfax Public Library for 20 years. She stamped her final book and retired in 2012. Jayne also loved to crochet, tat and do embroidery. Jayne had some serious skill when it came to sewing and took pride in sewing clothes for her family when they were growing. She even attempted making some homemade underwear and socks, which her sons quickly expressed their dislike for.