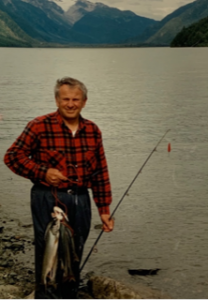 Delford (Del) Becke died peacefully February 22, 2021 and is now with the Lord God. His ashes will be interred in Abraham Lincoln National Cemetery in Elwood, Illinois. He is survived by Joanne Becke, his wife of 62 years; daughter Mary Zurhorst and her husband Craig, and two grandsons, Carl and Erich; daughter Sharon Jollie and her husband David, grandson Brian, and granddaughters Rachel and Melissa; son Paul and daughter-in-law, Gail (Nonenmacher); and daughter, Ruth Becke. Del was born April 27, 1930 to Herman and Hedwig (Sommer) Becke on their farm in rural Transit Township, Sibley County, Winthrop, Minnesota. He was baptized at Zion Lutheran Church. Del grew up on two farms in his childhood and spoke in German at home until age 6. He attended Sibley County one-room School Districts #49 and #44, and Winthrop High School, graduating in a class of 25 in 1948. After graduation he helped on the family farm for 3 years. The Korean Conflict occurred in 1950 and Del enlisted in the United States Air Force at age 21 in 1952. He was accepted into Aviation Cadet Aircraft Navigator training and commissioned as a 2nd Lieutenant and awarded Navigator Wings in 1953. He served at Ellington Air Force Base, Texas; Mather Air Force Base, California; Shaw Air Force Base, South Carolina, and others. During active duty and Minnesota Air Guard service, he flew B-26, B-57, C-97, C-119 and other aircraft in the Korea, Vietnam, Cuba and other conflicts in the Pacific and Europe. Del was released from active duty on May 8, 1956. On the Government Issue (“GI”) bill, he attended St. Olaf College, the University of Colorado, and the University of Nebraska, graduating in June 1959 with a Bachelor of Science degree. Del married the love of his life, Joanne Garmatz, of Brighton, Colorado, in 1959 in Utica, Nebraska. Together they spent their first year in Kaneohe, Hawaii. They returned to Minnesota where Del worked for the 3M Company and they celebrated the births of daughters Mary and Sharon. Four years later, son Paul and daughter Ruth entered the family. A National Science Foundation grant took Del and the family to Oregon State University in Corvallis, Oregon, where he earned a Master of Science degree. In 1970, the family moved to Germany where Del taught in a Bremen gynamsium and in the Department of Defense Dependents School (DoDDS) in Bonn. In June 1972, they moved to Ottertail, Minnesota and operated Rushview Resort on Rush Lake. In 1976, Del joined DoDDS again as a science teacher and the next 14 years took him and the family to Keflavik Naval Air Station, Iceland; Guantanamo Naval Air Station, Cuba; the 5th Army in Heidelberg, Germany; Kadena Air Force Base, Okinawa, Japan; and Parmisens Army Depot, Germany. Federal retirement from the United States Air Force and Civil Service came in 1990 and Del and Joanne enjoyed 12 years on Daggett Lake on the Whitefish Chain of Lakes, in Crosslake, Minnesota. In 2002 they moved to Mundelein, Illinois and lived near their son and daughter-in-law, near Diamond Lake. Del enjoyed travels, fishing, and exploring worldwide, and always saw the positive in life. In lieu of flowers, please make donations to Lutheran World Relief, www.lwr.org (1-800-597-5972) or Lutheran Church Charities https://lutheranchurchcharities.org (1-866-455-6466).