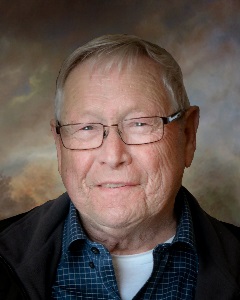 Duane George Messner, age 82, of Gaylord, Minnesota, passed away on February 25, 2021, at Ridgeview Center in Waconia from heart failure. Private family funeral service will be held at the Egesdal Funeral Home in Gaylord, with interment in the Winthrop Cemetery. The family would prefer memorials that will be shared with organizations that were near and dear to Duane. Clergy officiating Roy Koehl and Beirne Messner. Special music Apostolic Choir. Honorary casket bearers granddaughters, Ellie Messner, Ava Messner, and Ruby Messner. Casket bearers grandsons, Jeremy Kuhn, Preston Kuhn, Lukas Messner, Jack Terwey, Sam Terwey, Matt Messner, Nick Messner, and Henry Messner. Duane was born on May 9, 1938, to George and Esther (Miller) Messner and was baptized in the Apostolic Christian Faith. He grew up on a family farm West of Gaylord with his parents and older brother LeRoy. He graduated from Gaylord High School in 1957. Duane served seven years in the 2nd Armored Division Fort Hood, Texas, where he specialized in the Nike Universal Missile System as well as the Army Reserves. On December 13, 1964, he married Mona Kintzi and they resided in Gaylord all of their married life. Preceding “retirement” Duane was a successful business partner at Eastside Ford for 19 years and a parts manager for Poquette Chevrolet for 20 years prior to that. Secondary jobs included driving bus for the school district, owning a 10,000-bird chicken barn and painting/restoring implement machinery and vehicles. In retirement he enjoyed woodworking, restoring, and cruising around in his 51 Chevy Coupe, driving his Helix scooter and most recently his golf cart. He also had a love of flying model airplanes and kites, taking annual trips to Maine, morning coffee with the boys, weekly “Ruby Tuesday” dinners with friends and most of all spending time with his family. Duane loved his community and volunteering was important to him. Over the years he was actively involved with numerous organizations in Gaylord; Jaycees, Sertoma, City Charter Commission, Pedestrian Walkway Committee, Baseball Board, Park and Recreation Board, Board of Directors for the original Gaylord pool in 1962, and the Gaylord Area Aquatic Task Force and Board. He used his talent and expertise in painting by volunteering his time to preserve the cannons on display at the Gaylord City Park and the soldiers at the Veteran’s Walking Path of Honor in Arlington. Duane was proud to be the recipient of the Sertoma Service to Mankind Club Award and the Sertoma Service to Mankind District Award which acknowledged his time and community contributions. Duane was a giver and pleaser who thrived on doing what was right and helping those who were in need. If he couldn’t help personally, he usually had a tool or two to borrow to help get the job done. The family apologizes to anyone he may have approached or accused of not returning something (you know who are). It is believed that his sons lost too many of his screwdrivers and punches by pounding them into the ground as kids. His daughters on the other hand always returned his tools in better condition than when they received them. Duane is survived by his: wife, Mona; daughter, Sara (Keith) Kuhn, son, Dan (Karen) Messner, daughter, Kari (Russ) Terwey and son, Jeff (Jeni) Messner; eleven grandchildren, Jeremy and Preston Kuhn, Lukas, Ellie, Matt and Nick Messner, Jack and Sam Terwey and Ava, Henry and Ruby Messner; three nephews, three nieces, many great nieces, and great nephews as well as a great-great nephew. He was preceded in death by his parents, George and Esther Messner; brother, LeRoy Messner; father-in-law and mother-in-law; sister and brother-in-law and many aunts, uncles, and cousins. So many people were near and dear to Duane and our family. It would have meant a lot to our family to be able to gather and share the memories we all have but we recognize and acknowledge with today’s challenges it is not safe to do so. We have chosen to have a private visitation and funeral at this time. The family intends to hold a celebration of life service in the near future as today’s challenges permit. We find comfort in knowing and believing he is at peace, but there will always be a hole in our hearts. Arrangements by Egesdal Funeral Home in Gaylord, Minnesota. Online obituaries and guest book available at www.hantge.com<http://www.hantge.com/> Please click on obituaries and guest book