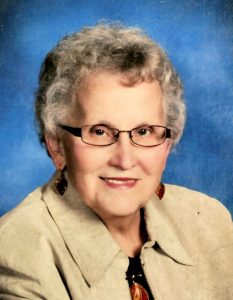 Eunice Ann Janicke age 88 of Winthrop passed away Friday April 9, 2021 at Abbott Northwestern Hospital in Minneapolis. Funeral services will be held at 11:00 a.m. on Thursday, April 15, 2021 at Zion Lutheran Church in Winthrop. Burial will be at St. Peter’s Lutheran Cemetery in Moltke Township. Visitation will be from 4 – 7 p.m. Wednesday at Zion Lutheran Church in Winthrop and one hour before the service at the church on Thursday. Mankato Mortuary in charge of arrangements. She is survived by her children: Susan Janicke (Robley Henry), Sheryl Bauer (Bruce), Roy Janicke (Doris), and James Janicke (Sherri Howard), grandchildren George Henry, Patrick Henry (Liza), Kelly Zendejas (Manny), Barrett Bauer (Claire), Bridget Bauer, and Colton Janicke and four great-grandchildren, Isaac, Isaiah, Ariel, and Zipporah. She is also survived by two brothers: Charles Sievert and Loren (Bev) Sievert. She was preceded in death by her parents, Paul and Alma Sievert, her spouse, James Janicke, and her sister Joanne Dreier. Eunice Sievert was born on July 1, 1932 to Paul and Alma Sievert. Eunice was baptized on July 10, 1932 at St. Peter’s Lutheran Church. She was the second of four children. She grew up in Moltke Township in rural Gibbon, MN and attended St. Peter’s Elementary School. She was confirmed on April 14, 1946. Her confirmation verse was John 10: 27-28. “My sheep hear my voice, and I know them, and they follow me; and I give them eternal life; and they shall never perish, neither shall any man pluck them out of my hand. ” During her high school years, her father took her and her sister, Joanne to Dr. Martin Luther College each week. After graduation, Eunice moved to Minneapolis and worked at Northwestern National Bank. She lived with a group of girlfriends from Gibbon and school in New Ulm. Eunice met James Janicke during a weekend visit to her parent’s farm. Jim was helping Paul Sievert with the fall harvest. James Janicke and Eunice Sievert were married on May 26, 1956. They lived in rural Gibbon until 1966 when they purchased a farm in Transit Township, rural Winthrop, MN. Jim and Eunice had four children: Susan, Sheryl, Roy, and James. Eunice worked summers at local canning factories while her children were small and raised cucumbers. She taught Sunday School for many years and was a member of the Ladies Guild at Zion Lutheran Church in Winthrop, MN. She also sang in the church choir. In 1968, she went to work at Minnesota Mining and Manufacturing in New Ulm. Eunice worked at 3M for 27 years. James Janicke died in 2000. Eunice worked as a housekeeper at Zion Lutheran Church for many years. In her retirement, Eunice enjoyed spending time with her family, reading, gardening, baking, traveling, and shopping. Eunice died on April 9, 2021.