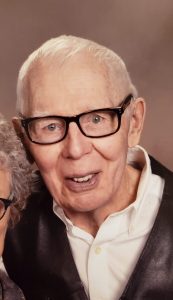 Virgil Youngblom, age 91 of Belle Plaine, formerly of Lafayette, MN died on Sunday, April 18, 2021 at the Belle Plaine Lutheran Home in Belle Plaine. Funeral services were Saturday, April 24, 10:30 a.m. at St. John Lutheran Church in Belle Plaine. Burial with Military Honors by the Lafayette American Legion were at First Lutheran Cemetery in Lafayette, MN. He is survived by his wife of 66 years Shirley; children; Caren Grotberg of Belle Plaine, MN; Jim (Janey) Youngblom of Turlock, CA; Bob (Cindy) Youngblom of Lafayette, MN; Don (Inger) Youngblom of Asker, Norway and Rich (Kay) Youngblom of Inver Grove Hts, MN. 14 grandchildren, 14 great-grand-children and brother, Jerome (Pauline) Youngblom of Zimmerman, MN. He is preceded in death by his parents and brother and wife, Gordon and Sharon Youngblom. Virgil was born on February 17, 1930 near Gibbon, MN. He grew up near Lafayette and graduated from Winthrop High School in 1947. He worked for a short time at a gas and service station in Lafayette before entering the United States Army in 1951 serving in Korea until 1953. He married Shirley Lund on February 4, 1955 at First Lutheran Church, Lafayette, MN. The couple lived near Lafayette, MN for many years where he owned and operated the Mobil Station in Lafayette for over 30 years. After leaving the Mobile Station he serviced some cars at his rural home for several years before becoming a rural mail carrier in the late 80’s. The couple moved to Belle Plaine in 1995 and he continued to work as a mail carrier in Lafayette for a short time after moving. When younger, Virgil played town team baseball and later coached and managed the Lafayette team. He was active in his church and the community of Lafayette, serving on Lafayette City Council and fire dept. His interest included watching sports with grandkids, fishing, camping, flying and especially traveling with Shirley. Most recently, he was honored by his “Honor Flight” to Washington D.C. with his son Robert in 2019.