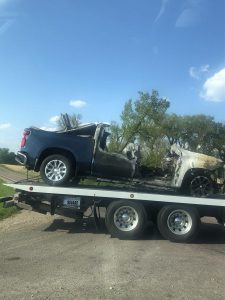 On Saturday, May 15, at approximately 12:52 p.m., the Sibley County Sheriff’s Office was dispatched to the intersection of County Road 4 and 226th Street. Robert Linn, 80 of Faribault, was operating a 2019 Chevrolet Silverado towing a RV trailer. He was pronounced dead at the scene. He was the only occupant of the vehicle. Through investigation, the Sheriff’s Office learned that Linn was traveling southbound on CR4 and the vehicle crossed over the center line, drifted across the northbound lane and into the ditch. The vehicle struck a tree in a nearby grove by a farm site and the vehicle become engulfed in flames. No other vehicles were involved in the crash. The crash is still under investigation. Assisting at the scene were Winthrop Fire Department, Winthrop Ambulance and Gaylord Police Department.