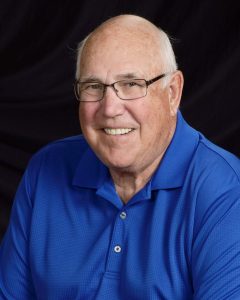 Vinton Wesley Zabel passed away on Friday May 21, 2021 in Mesa, AZ. He was born on May 25, 1934 to Carl and Lola (Erickson) Zabel in Grafton, ND. He graduated from Grafton High School and attended Valley City State Teachers College, in Valley City, ND for 2 years. He enlisted in the Army for 2 years and after being discharged he returned to VCTC to finish his degree. He earned his Master of Education from NDSU, Fargo, ND. He spent 36 years in public education serving on many boards including the board of directors of MASSP, MN Association of Secondary School Principals, for seven years becoming the first outstate President. Valley City is also where he met Darlene (Popp) Zabel his wife and best friend of 62 years. They spent time golfing, traveling, going to concerts, sporting and theater events, entertaining, playing cards and fishing. They fished many places in the Mid-West and in 2011 they fished Great Slave Lake in the NW Territory, his lifelong dream trip. He loved most sports especially the MN Twins and MN Vikings even when they let him down. After retiring from education, he did taxes for H&R Block in Glencoe, MN for 10 years. The Hispanic population took a liking to him and would ask for “the old guy”. Zabel’s became “Snowbirds” splitting their time between Mesa, AZ and Lake Miltona, MN becoming full time residents of Mesa in 2017. He was preceded in death by his parents Carl and Lola Zabel, sister Doris Sundguist, brother in laws Wally Sundquist and Ruben Solee, nephews David and Charles Sundquist and his son-in-law Eric VanRhee. Surviving him are his sister Laverne Solee, his wife Darlene, son Jay Zabel, daughter Jodi VanRhee, four grandchildren Caleb VanRhee and wife Adelphe, Joshua and wife Rebekah, Rachel Dutson and husband Arthur, and Rebecca Kochersheidt, three greatgrandchildren, Surrey VanRhee, Jaxon and Selah Dutson and 13 special nieces, nephews and their spouses. There will be a Memorial Service at the Eastgate Clubhouse on Saturday, June 19th at 4 PM.