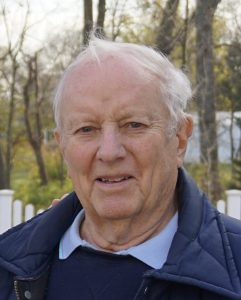 Charles John Johnson, 89, of Gibbon passed away peacefully on Friday, June 18, 2021. Funeral service will be 11:00 a.m. Thursday, July 1, 2021, at the Augustana Lutheran Church in Gibbon with Pastor Erik Karlson officiating. Burial will be in the Augustana Lutheran Church Cemetery. Visitation will be 9:00 – 10:45 a.m. Thursday, July 1, 2021, at the church. Minnesota Valley Funeral Home in Gibbon is assisting the family. To leave an online condolence for his family, or to sign the guestbook, go to: mvfh.org Charles is survived by his son, Charles “Chuck” E. Johnson, and his daughter, Jean (Randy) Stresemann; grandson, Samuel Stresemann; a cousin, Donald Runmark; brothers-in-law and sisters-in-law, Robert and Linda Wittenberg, Sandy and John Hatlestad, Jerry and Sherry Wittenberg, Pam (Doug Bruswitz) Palmquist, and Tom Wittenberg; and nieces and nephews. He is preceded in death by his parents, Elmer and Harriet Johnson; his wife, Marvel Johnson; his granddaughter, Sarah Stresemann; his brother Wallace (Rhoda) Johnson; and a sister, Nan in infancy. Charles John Johnson was born to Elmer and Harriet (Peterson) Johnson on October 26, 1931, in New Ulm. He was named after his grandfather, carrying on the tradition of family names. He lived all his life in Gibbon. He was baptized on November 26, 1931, confirmed in his faith on July 7, 1946, and married Marvel Wittenberg on October 21, 1961; all at Augustana Lutheran Church. Charles graduated from Gibbon High School, class of 1950. Growing up in the family business his grandfather started, C J Johnson & Sons auto dealership, Charles worked the “glorious” jobs like all youth, later making his way up to body work, the parts department, and the office. During this time, he also held part-time work driving school bus and carrying mail for the US Postal Service. In 1971 when the family business closed their doors, he operated Chuck’s Body Shop out of his garage. He eventually took the full-time mail carrier position, retiring after 31 years of dedicated service. Never slowing down, he kept busy during retirement by helping out at the Gibbon Gazette. He led a hard-working life, but always took time to enjoy the simplicities of life. He loved to be outside whether it was in the vegetable garden, planting flowers, or putzing around in the yard. His favorite color must have been blue, since he donned the same blue sweatshirt and blue coat almost every day of the year, even in the summertime. The one point of extravagance came when he took the trip of a lifetime to see the pyramids in Egypt. When it came to relaxing, he loved playing cribbage and cards. He was a fixer upper kind of guy; he had a tool or part for everything and helped his children out whenever they needed it. He cherished every moment he spent with his family. He lived a full life and will be missed dearly by his family. We know life will never be the same without him. Blessed be his memory. www.mvfh.org