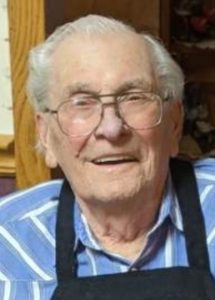 Orlo Justin Anderson, age 94, of Winthrop, died Friday, June 25, 2021 at the Winthrop Good Samaritan Society. Funeral service will be 11:00 a.m. Wednesday, June 30, 2021, at the First Lutheran Church in Winthrop with Pastor Erik Karlson officiating. Burial with military honors accorded by the Winthrop Honor Guard will be in the Winthrop Cemetery. Visitation will be 9:00 – 10:45 a.m. Wednesday, June 30, 2021, at the church. The service will be live-streamed through the Minnesota Valley Funeral Home’s Facebook page starting at 11 a.m. on Wednesday. Minnesota Valley Funeral Home in Gibbon is assisting the family. To leave an online condolence for his family, or to sign the guestbook, go to: mvfh.org Orlo is survived by his wife, Virginia; his daughters, Renae (Terry) Wilhelm of Searles, Sheila (Dave) Honl of Deerwood, and Rhonda (Tom) Wilhelm of Winthrop; son, Steven (Valerie) Anderson of St. Cloud; nine grandchildren; sixteen great-grandchildren; sisters, Darlene Ehlert of Fergus Falls, Karen (Tex) Larson of Rothsay; brothers, LeRoy (Joan) Anderson of Fergus Falls and Keith (Eileen) Anderson of Alexandria; sister-in-law, Judy (Dave) Carlson of Richville; brother-in-law, Johnny Hought of Foxhome; several nieces and nephews; and his beloved bird, Sparky. He was preceded in death by his parents, Anton and Clara Anderson; in-laws, Anthony and Idella Ochalla; sisters, Marcella Heitkamp and Wanda Hought; brothers, Calmer Anderson and Lynn Anderson. Orlo Justin Anderson was born at St. Luke’s Hospital in Fergus Falls, MN on May 26, 1927 to Anton & Clara (Martinson) Anderson. He was confirmed at Vukku Lutheran Church, Foxhome, MN by J.T. Quanbeck. He attended Wilkin County District 54 rural school, Campbell High School and then graduated from West Central School of Ag in Morris, MN in March of 1945. In May of 1945 he entered the U.S. Navy and served aboard the USS Nereus. He was honorably discharged July 23, 1946. On November 29, 1947 he married Virginia Ochalla in Wahpeton, ND. This marriage was blessed with 4 children. Orlo worked in sales and service for Ansley Dairy Equipment, Hawk Built Manufacturing, Long Manufacturing, JLCO Grain Dryers, USA and ITS Semi Trailer Sales. After retirement he drove truck hauling peas, sweetcorn and sugar beets. He was a member of First Lutheran Church and served several terms on Church Council and Cemetery Board. He was also an active member of the American Legion serving as Commander and Adjutant, V.F.W. and Honor Guard. Orlo received the Winthrop Chamber Service Award in 2017 and served as Grand Marshall for the 2018 Farm City Funfest Parade. For over 50 years, Orlo passed on the family tradition of making Krumkake at Christmas and special occasions to his children, grandchildren and great-grandchildren. He loved woodworking, making many furniture pieces and cabinetry, tinkering and fixing things, taking care of his lawn, but his favorite thing was spending time with family. When a stroke on Christmas Eve, 2020 took his memory, Orlo became a resident of Oak Terrace in Gaylord, and moved to Good Samaritan Society in Winthrop on May 23, 2021 to be closer to family. Even with the confusion of the stroke, he would tell everyone what a wonderful family he had and how much he loved all of us, and that God had blessed him with a good life. Blessed be his memory. In lieu of flowers, please make a donation to a charity of your choice www.mvfh.org