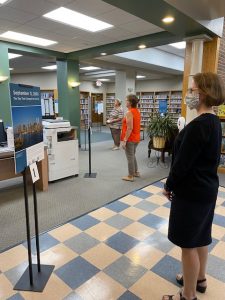 The Winthrop Public Library hosted s 9/11 program on Saturday, marking the 20th anniversary of the terrorist attacks. Numerous posters were stationed in the library which detailed the events of September 11, 2001, and the many stories of heroics, survivors and tragedies from that day. On the second level of Winthrop City Hall, there were computers set up for visitors to find information about 9/11, childrens’ activities and a video presentation. A Winthrop Fire Department truck was also visible outside the Library throughout the morning. Photos by Karen Klenk and Michael Mattison