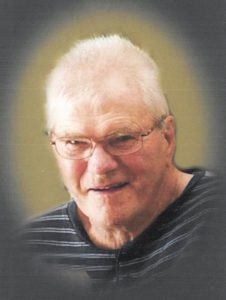 Alan Lee Johnson, age 74, devoted husband, father, and grandfather, was called to his heavenly home by his Lord and Savior, Jesus Christ, on Monday, December 20, 2021 at the New Ulm Medical Center in New Ulm, MN. Funeral service were held at 11:00 a.m. on Friday, December 24, 2021 at Immanuel Lutheran Church in Gibbon with Reverend Steven Bauer officiating. Burial will follow in Immanuel Lutheran Cemetery. Visitation was held from 9-11 a.m. on Friday at Immanuel Lutheran Church in Gibbon. Minnesota Valley Funeral Home in Gibbon is assisting the family with arrangements. To leave an online condolence for his family, or to sign the guestbook, go to: www.mvfh.org Alan is survived by his wife, Loretta; his children, Sheldon (Lura) Johnson of Oakdale, Keith (Anna) Johnson of Gibbon, Lindsey (Naomi) Johnson of Gibbon, and Lawanda (Kirk) Meyer of Brandon, SD; his brother, David (Kathryn) Johnson of Wasilla, AK; 17 grandchildren; three nephews; four nieces; and two half-nieces. He was preceded in death by his parents, Reuben and Martha Johnson, and his half-brother, Roger Johnson. Alan was born September 26, 1947 in Gaylord, MN to Reuben and Martha (Burdorf) Johnson. He was baptized into the Lord’s family on October 19, 1947 and confirmed by Pastor Herbert H. Kesting on March 26, 1961 at Immanuel Lutheran Church in Gibbon, MN. He attended grade school and high school in Gibbon. While attending the University of Minnesota, he enjoyed driving school buses and graduated with a degree in Agricultural Business. He met his future wife of 49 years, Loretta Louetta Radke, at a polka dance in the Gibbon ballroom. Alan and Loretta were married at Immanuel Lutheran Church in Gibbon, MN on April 8, 1972. They made their home on the farm a mile south of Gibbon and were blessed with four children: Sheldon, Keith, Lindsey, and Lawanda. Alan was a devout Lutheran man who loved his church, family, and farming. As the head of his household, he was diligent in leading the family in nightly devotions, was active in his church, and made Christian education a priority. He had a servant’s heart and was always willing to fix something for a neighbor in his machine shop. His greatest treasure was his faith, which he readily shared with all who cared for him over the past 16 years, after a farm accident which left him quadriplegic. Well done, good and faithful servant. To God alone be the glory! Memorials may be made to Immanuel Lutheran Church (1380 1st Ave, PO Box 88, Gibbon, MN 55335), Prairie Lutheran School (PO Box 130, Fairfax, MN 55332), or Minnesota Valley Lutheran High School (45638 561st Ave, New Ulm, MN 56073). www.mvfh.org