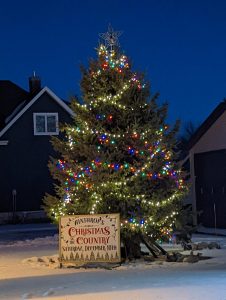 As the weather has chilled and the snow has fallen, that means that it is time for Winthrop’s Christmas in the Country. Saturday will be packed with activities for all ages. The morning kicks off with mimosas and mistletoe from 10 a.m. to 1 p.m. at Tanker Bay. Muffins were donated by Hahn’s Dining and Lounge and mimosas will also be available. “People can mingle and do some fun crafts,” said Morgan Jackson. There will be a vendor fair and cookie sale at Hahn’s from 1 p.m. to 4 p.m. “It’s a great time to grab last-minute Christmas gifts or something for yourself,” Jackson said. The Winthrop Generation of Women’s Club has the cookie sale. From 4 p.m. to 6 p.m. at Winthrop City Hall, the kids will get their chance to see Santa and Mrs. Claus. There will also be crafts. face painting, hot chocolate bar and snacks. “In year’s past, Santa and Mrs. Claus have just been able to be in the parade because of COVID and we are super excited to have them back in City Hall and they will be giving the kids a little gift and snack bag,” Jackson said. “It will be nice for them to see them in person and get your picture with Santa.” The reverse parade has a new route and will be held from 5 p.m. to 7 p.m. The parade will be held on Second Street, beginning at CSAH 33 and head east to Main Street. There are currently 14 floats that will be stationary in the middle of the street. Cars will be able to drive through on the south side of Second Street and the north side will be available for those walking. Transit Trailblazer will be will have a fish house on Second and Renville which will have food and beverages for sale. There will also be fire pits located along the way for people to warm up and mingle as they walk through the parade route. Tanker Bay will be hosting a mingle and jingle from 8:30 p.m. to close. Zeew Factors will be entertaining the crowd. There will also be an ugly sweater contest with juding at 10 p.m. First and second place will receive Winthrop Scrip Money. Joining Jackson on the committee are Katie Gran, Dawn Wickenhauser, Brianna Pagel, Jennifer Isaac and Sandy Kley.