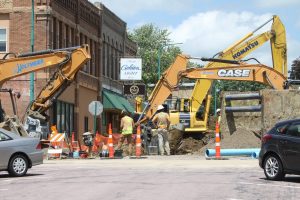 Weeks ago, the crew from Holtmeier Construction began work on the utility improvement project in downtown Winthrop. The early work focused on the blocks south of Highway 19 on North Hennepin. Last week, the crew started opening up the two blocks of North Carver south of the highway. On Monday, much of the crew’s attention was directed to the intersection of North Carver and Second Street. Utilities such as water, sanitary sewer and storm sewer will be replaced. Photo by Michael Mattison