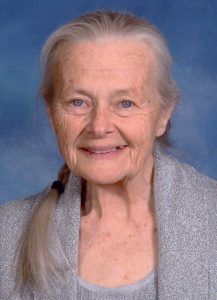 OREGON/WAUSAU –Wis. Jesus took Eunice L. Groehler, age 85, to her mansion in Heaven on Wednesday, April 29, 2020. She passed away peacefully at home with Kevin and Deb by her side. She was born on April 5, 1935, in Gibbon, Minn., the daughter of Wilfred and Erna (Jannicke) Fenske. Eunice graduated from Gibbon High School in Gibbon, Minn. She married Elroy Groehler on May 14, 1957, at The Little Brown Church in the Vale in Nashua, Iowa. Eunice loved sewing, quilting, and painting. She enjoyed gardening, cooking and canning. Spending time with family, friends and pets, vacationing, and dancing with Elroy, made her smile. Eunice, who was a faith-filled Christian, is now in the presence of Jesus, dancing with Elroy in Heaven. Eunice is survived by her son, Kevin (Deborah) Groehler; daughter, Melanie (Timothy) Franke; granddaughter, Kayla Groehler (fiancé, Alec Cervenka); her special “German Sister”, JoyCe Abrams (Deborah’s mother); three sisters, Eileen Hurd, Carol (George) Paur and Marjorie (Tommy) Damarais; sisters-in-law, Margaret Rosenthal and Dorothy Boettcher; and many nieces, nephews, and cousins. She was preceded in death by her husband, Elroy Groehler; her daughter, Monica May; her parents, Wilfred and Erna Fenske and Raymond and Rose Groehler; brothers, Loren and Dwayne Fenske; brothers-in-law, Thomas Hurd, Dale Rosenthal and Harvey Boettcher; and brother and sister-in-law, Delmar and Alice Groehler. A memorial service will be held at a later date. Burial will take place in Winthrop Cemetery, Winthrop, Minn. In lieu of flowers, memorials may be made to the family. Eunice’s family would like to thank Pastor Bartels, Pastor Tweit, the members of Holy Cross Lutheran Church, Eunice’s friends, and the Wisco “Family” for their love and prayers. Also, special thanks to the staff of The Edgewater, Agrace HospiceCare and The Alzheimer’s Alliance for their care and support. Online condolences may be made at www.gundersonfh.com. Gunderson Oregon Funeral & Cremation Care 1150 Park St. (608) 835-3515