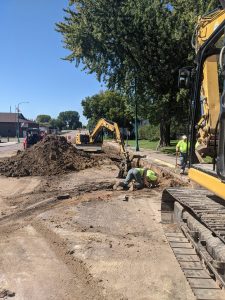 It was tough to get around Winthrop last week without seeing some sort of infrastructure repair going on. Tuesday saw crews just west of the Highway 19-15 intersection milling a portion of the highway and putting down new roadway. Highway 19 had a little rerouting of lanes on Tuesday in Winthrop as crews replaced broken water main valves at the Main Street intersection as well as the North Carver Street intersection. Later in the week, a sewer line was repaired on Second Street, beginning just west of Main Street. Photos by Michael Mattison

For more photos, check out the September 29 issue of the Winthrop News.