Steven James Palmer, age 64, of Fairfax, died peacefully at his home on Friday, August 16, 2019. Funeral services were held on Monday, August 26, 2019, at 10:00 a.m. at St. Andrew’s Catholic Church in Fairfax. The Rev. Bruno Santiago will officiate. Burial will be in Fort Ridgley Cemetery south of Fairfax. Visitation was held Sunday from 4-8 p.m. and continued on Monday from 9-10:00 a.m. all at the church in Fairfax. Arrangements are with Dirks-Blem Funeral Service, Renville, MN. He is survived by his wife Tracie, his daughter Heather (and Simon) Palmer Watts of Sherman Oaks, CA, his siblings: Tom (and Denise) Palmer of Fairfax, Mike (and Jolene) Palmer of Fairfax, Mary (and Kevin) O’Keefe of Coon Rapids, and Dan (and Janelle) Palmer of Columbus, MT, Tracie’s siblings: Kathlene (and Al) Sherwin of Orlando, FL, Doreen (and Dr. Tom) Bostwick of Glendale, AZ, and Ross (and Theresa) Hanson of Mesa, AZ; Tracie’s step mother Dorothy Hanson; Tracie’s step siblings: Mike Wiener and significant other Nikki, Mary Parisi, and Anne (and Tim) Jones; many nieces, nephews, and other relatives and friends. He was preceded in death by his parents, his brothers Doug and Pat, his father-in-law Harry Hanson, and his mother-in-law Corrine and her husband Dr. C.A. Anderson. Steven James Palmer was born on November 17, 1954, in New Ulm, Minnesota to James and Bernice (Dummer) Palmer. He grew up in Fairfax and graduated from Fairfax High School in 1972. After graduation, he attended Willmar Junior College and studied mass communications. During this time he also worked as a sports writer for the West Central Tribune in Willmar. At the age of 19, he became the sports editor at the Tribune, making him the youngest sports editor at a daily paper in Minnesota. After working with the West Central Tribune for five years, he moved to Florida and wrote for the South Florida Sun Time, which covered the Miami Dolphins and Miami University Hurricanes. He later moved back for Fairfax and worked as editor at and later owned the Fairfax Standard. His work at the Standard won him many awards both locally and nationally. Steve was united in marriage to Tracie Hanson on April 28, 1984, in Hector, Minnesota. After his retirement in 2007, Steve continued to do freelance writing for several papers and the Senior Perspective. He also wrote a book “Summer Diamonds”, a book about the history of the Fairfax amateur baseball. Steve loved sports- especially playing golf, traveling, and writing about his experiences. Steve was a loving and wonderful husband and father. A hands on father who loved, protected, and supported his daughter Heather not only while she was growing up, but also later in her career in the movie industry. He also showed this love for Tracie, supporting her in her work as a LPN and through her illness. Blessed Be His Memory. 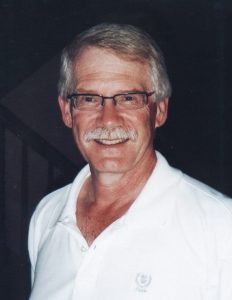