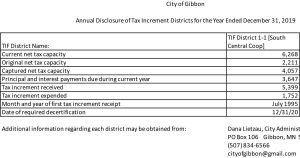 Winthrop City Council Potentially Dangerous Dog Hearing Monday, July 6th, 2020 The Winthrop City Council Met at 6:30 pm, on Monday, July 6th, for the purpose of holding a potentially dangerous dog hearing. ROL CALL: Council members: Kelly Pierson, Pete Machaiek, Julie Trebelhorn, Dale Malheim, Rob Edwards and Lynn Drinkall, City Staff present: City Administrator Jenny Palmer, Winthrop City Attorney Aaron Walton, Winthrop Officer Clifton LeRude Audience: Jayda Sletten, Char Linde, Donovan Boswell, Lindsey Muchow. Mayor Pierson asked Attorney Walton to explain to the council the reason for the hearing. Walton presented that the hearing was for an incident that happened on June 8th regarding Ms. Muchow’s dog and Ms. Sletten. The Council will hear from both the victim and the dogs’ owner and they will have to decide if the dog should be deemed “Potentially Dangerous”. To be deemed “potentially dangerous” the dog has to meet one of the three criteria: 1. When unprovoked, inflicts bites on a human or domestic animal on public or private property. 2. When unprovoked, chases or approaches a person, including a person on a bicycle, upon the streets, sidewalks, or any public or private property, other than the dog owner’s property, in an apparent attitude of attack; or 3. Has known propensity, tendency, or disposition to attack unprovoked, causing injury or otherwise threatening the safety of humans or domestic animals. If the council feels the animal meets one of the three criteria the dog will be deemed “potentially dangerous” this is considered a first strike. If the dog attacks again it will be deemed a “dangerous dog” which would result in conditions to the owners for the dog to stay in town. There were two dogs involved in the attack. The dogs’ owners are not contesting the dog they feel attacked Jayda, Loki, they are contesting the dog they feel did not attack, Bjorn. Ms. Sletten recounted her memory of the events of the evening. She said it was 10 o’clock in the evening, it was almost dark. As she walked by the property of the dogs she was attacked. She said she saw two dogs running towards her. She is unclear if one or both dogs bit her. She was on the phone so she was not paying full attention at the time of attack. Once Ms. Sletten got home her mother, Ms. Linde, called the Police to report the incident and then took Ms. Sletten to the emergency room for her injuries. Ms. Sletten was bit on the arm with deep punctures, she also sustained scratches and at tooth mark on her neck. Ms. Linde feels both dogs were involved in the attack and participated in the incident. Mr. Boswell presented that Ms. Muchow was outside with both dogs on a leash, the grass was wet and she was barefoot, when Ms. Sletten walked by. He feels Loki was the only dog that attacked and Bjorn was just following his sister. He stated that when he called the dogs Bjorn stopped running after Ms. Sletten and stopped the curb. Neither dog has had an incident prior to this event. They are either going to re-home Loki or have her put down by the end of the month. They both feel that Bjorn will be a better dog without Loki around. They don’t feel that Bjorn should be designated potentially dangerous. After both parties presented their cases and the council had a chance to ask any clarifying questions Mayor Pierson called for a motion. Motion Trebelhorn, second Malheim, after no further discussion Mayor Pierson called the vote to designate Bjorn a “potentially dangerous dog” passed voice vote. Jenny Palmer, Administrator

Winthrop City Council Regular Minutes Monday, July 6th, 2020 A regular meeting of the Winthrop City Council was called to order by Mayor Kelly Pierson at 7:00 p.m. on Monday, July 6th at the City Hall. PLEDGE OF ALLEGIANCE ROLL CALL:Kelly Pierson, Pete Machaiek, Julie Trebelhorn, Dale Malheim, Rob Edwards and Lynn Drinkall, City Staff present: City Administrator Jenny Palmer, Winthrop City Attorney Aaron Walton, Utilities/Public Works Supervisor Troy Martin Audience: Mike Mattison (Winthrop News), Steve Saxton, Bryan Petzel OPEN PUBLIC FORUM No one spoke. APPROVAL OF AGENDA Palmer removed item b. from the agenda. Motion Malheim, second Trebelhorn to approve the agenda. Passed voice vote. APPROVAL OF CONSENT AGENDA Motion Edwards, Second Malheim to approve the consent agenda. Passed voice vote. NEW BUSINESS a. 2020-142 An Ordinance Authorizing the Sale of 402 N. Hennepin to Paula Bruno and Martin Medrano (1st Reading) (A)—Palmer talked to Ms. Bruno about the offer to pay $3,500 for the lot if the City agrees to pay the pending assessments. She was agreeable to the offer. Motion Edwards, second Malheim to approve the first reading. Passed voice vote. b. Cyber Security Quote (A)— removed. c. Sanitary Sewer Voluntary Separation Policy (A)/(I)—Malheim presented the proposed policy he prepared to the council. Mayor Pierson would like to have the committee review for adoption next month. d. CARES Act Money (A)/(I) Sibley County Commissioner Steve Saxton was in attendance to present to the council an option to have all the cities in Sibley County work with the county officials to distribute the CARES Act money. Council discussed some ideas for how this will work to make sure local businesses get the most benefit from the funds. The consensus was to get an application put together and set a deadline for receiving applications and see where the funds are at that point, as well as the feelings of the council. No action was taken at this time. e. R2020-15 Resolution Issuing Sale of Bonds for 2020A Project (A)—This resolution will approve the sale of bonds through a mega loan from Minnesota Rural Water. These are the funds for the current Hennepin and Carver Street project. Motion Trebelhorn, second Edwards to approve the resolution. Passes voice vote. f. 2020 Construction Project Update (I)—Bryan Petzel with ISG was in attendance to present to the council the progress of the 2020 construction on Hennepin and Carver Streets. Utilities on Hennepin should be done this week. There was a little delay due to some steam pipes in the road on Hennepin. They are expecting to find some more on Carver. There are some contingencies built into the project to cover asbestos removal if the steam pipes need to be moved. If they can be avoided they will be left in place. There are two crews in town currently, they will be starting pavement removal on Carver this week. Crews are hoping to have Hennepin filled and graveled by the end of next week. Overall things are progressing well and only had one day of rain delay after the rain storm last week. UNFINISHED BUSINESS a. NONE Report of Officers, Boards and Committees a. ADMINISTRATOR/EDA REPORT—Palmer reported that the Rail Road permit is finally done so hopefully work can start on the storm sewer line at DFA soon. Construction is proceeding well. Troy and Palmer met with DFA and ISG regarding the wastewater reuse project. They have agreed to participate in Phase II of the feasibility study. The large rain event went as well as it could go. Palmer spent about 15 hours on EDA related tasks. There was no meeting in June. Farm City Fun Fest is July 11th downtown this year. Music in the Park has resumed. The next event is July 9th. b. CITY LEGAL REPORT— None c. WATER/SEWER DEPARTMENT REPORT- Mayor Pierson thanked Public Works Director Troy Martin for the great work the crew did during the rain event last week. Martin reported that overall things went as well as they could have gone. They have enough pumps to keep the water flowing. They had to bypass the ponds and pump directly into the ditch, but that is not unusual in an event like this. d. STREET DEPARTMENT— None e. ELECTRIC DEPARMENT REPORT—Martin Reported that Chapman metering came to town and finished installing all the remote read demand meters. All of the electric meters have been installed now, there are just a few commercial water meters left to be installed. f. FIRE DEPARTMENT REPORT—None g. AMBULANCE REPORT—None h. POLICE CHIEF’S REPORT—Johnson is on vacation this week. She provided a written report. i. PLANNING COMMISSION—No meeting j. RS FIBER REPORT—None k. CABLE COMMISSION—Malheim reported that they had a Zoom meeting. They are sending out the grant letters to the schools. They are also working on a policy for cities to replace their audio/video equipment. ADJOURNMENT Motion Machaiek, second Drinkall to adjourn. Passed voice vote. Meeting was adjourned at 7:57 pm. Jenny Palmer, Administrator