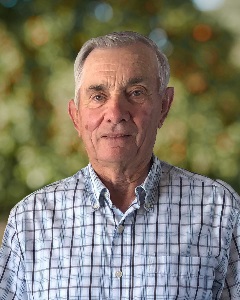 Darwin Wagner, age 81, of Brownton passed away Friday, August 27, 2021, at Methodist Hospital in St. Louis Park, Minnesota. Funeral service were held Wednesday, September 1, 2021, 11:00 a.m. at Peace Lutheran Church in Winthrop with interment in the Winthrop Cemetery. Clergy officiating was Pastor Bob Miner. Organist was Lori Pagel. Soloist was Kathy Brinkman, “In The Garden.” Reflections Matthew Brinkman and Shirley Hopp. Congregational hymns sung were “How Great Thou Art”, “God Be With You Until We Meet Again”, and “Softly And Tenderly.” Special honorary casket bearers were grandchildren, Lukas Kuttner and Leah Kuttner. Honorary casket bearers were Godchildren, Daniel Lindeman, Randy Voigt, and Caroline Stutsman. Casket bearers were Matthew Brinkman, Owen Brinkman, Jon Wagner, Daniel Wagner, Aaron Sylvester, Robert Doerr, and Arlin Miller. Darwin is survived by his: wife, Mavis Wagner of Brownton, MN; children, Lynnel Brinkman and her husband, Jason of Glencoe, MN, Scott Wagner of Brownton, MN, and Lori Kuttner and her husband, Gregory of Stewart, MN; grandchildren, Matthew Brinkman, Owen Brinkman, Lukas Kuttner, Leah Kuttner; sisters-in-law, Marjorie Wagner, Donna (Orlin) Sylvester; brothers-in-law, Eugene (Deborah) Voigt and Myron (Darlene) Voigt; nieces, nephews, other relatives and many friends. Darwin was preceded in death by his parents, Henry and Regina Wagner; brother, David Wagner; special uncle and aunt, Kenneth and Hertha (Schuette) Krueger; father-in-law and mother-in-law, Elroy and Gladys (Brelje) Voigt. Darwin Dwayne Wagner was born on June 27, 1940, in Bismarck Township, Sibley County, Minnesota. He was the son of Henry and Regina (Schuette) Wagner. Darwin was baptized as an infant on July 14, 1940, by Reverend C.H. Kowalski at St. Paul’s Lutheran Church in Stewart and was later confirmed in his faith as a youth on April 11, 1954, by Reverend A. Schira at St. John’s Lutheran Church in Bismarck Township. He received his education in Winthrop and was a graduate of the Winthrop High School Class of 1958. On November 2, 1963, Darwin was united in marriage to Mavis Voigt at Immanuel Lutheran Church in Gaylord. Darwin and Mavis were blessed with three children, Lynnel, Scott and Lori. They shared 57 years of marriage. Darwin’s whole life revolved around farming. In 1958 he started farming and in 1964 Darwin and Mavis moved to the current homestead in Round Grove Township, McLeod County. He retired from farming in 2002, but continued helping with the fall harvest and spring planting. He was called the “Energizer Bunny” by his brother-in-law because he couldn’t believe how he could “go, go, go” at his age of 80. Darwin was a member of Peace Lutheran Church in Winthrop for 76 years, served as a member of the church council, and was head usher for funerals for 15 years. Darwin sold Funks G Hybrid Seeds for 16 years, was a member of the Round Grove Township Board for 41 years, and graded township roads for 10 years. Darwin enjoyed sports, woodworking, mechanic work, grading, and yard work. He was able to strike up a conversation with anyone. He cherished the time he spent with family and friends, especially his children and grandchildren, and loved watching them play sports. Darwin passed away on Friday, August 27, 2021, from complications of heart surgery with his family by his side at Methodist Hospital in St. Louis Park at the age of 81 years. Blessed be his memory. Arrangements by Dalin-Hantge Funeral Chapel in Winthrop, Minnesota. Online obituaries and guest book available at www.hantge.com<http://www.hantge.com/>