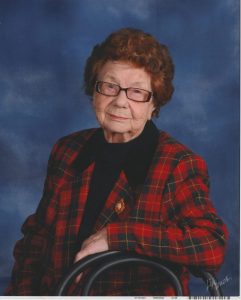 Florence Edna May Haaheim, age 99 of Winthrop died peacefully on Friday, November 22, 2019, at the Oak Terrace Health Care Center in Gaylord. Funeral service will be held at 11 a.m. on Friday, November 29, 2019, at the First Lutheran Church in Winthrop. Pastor Erik Karlson will officiate, and burial will follow in the Winthrop Cemetery. Visitation will be from 9:30-11:00 a.m. on Friday at the church prior to the service. To leave an online condolence for her family, or to sign the guestbook, go to: mvfh.org Edna is survived by her son, Gary Finnson of Winthrop; her grandchildren, Maxine (Brian) Berry of the United Kingdom, Damien Finnson of the United Kingdom; 2 great-grandchildren; sister, Joan Barrett of Mattlock, England; her niece, Gayle Lillard of Phoenix, Arizona; and many other nieces, nephews, relatives and close friends. She was preceded in death by her parents; her first husband, John Finner Finnson; her second husband, Meril Earl Haaheim; and her sisters, Peggy Haslem, and Brenda Bagshaw. Florence Edna May Green was born June 7, 1920 in Chesterfield, England to Reginald and Edith Green. She attended and completed comprehensive school in England. At the age of 18, Edna was drafted into the British Army where she served as a WAF during the time of WWII. Although she was stationed in England for her time of service, Edna helped the men that fought in Dunkirk as well as D-Day. Edna was united in marriage to John Finner-Finnson in 1941 in England. This union blessed the couple with their son Gary. John later died in a tragic mining accident in Manitoba, Canada. Her and Gary made the move to Winthrop in 1951, and while getting established in the states, lived with Dr. Rolf Hovde. Edna later married Meril Haaheim in 1952 and together made their home in Winthrop. Edna dearly loved working with her hands. Her gift for knitting, sewing, crocheting, and quilting will be cherished by her loved ones for generations. Edna also enjoyed to travel making regular trips to England as well as through Europe. To socialize, she enjoyed spending time on the golf course or over a good game of bridge or canasta with friends. Edna was a devout and dedicated member of her community and church. She was a member of the First Lutheran Church of Winthrop where she served many years with the Ladies Aid and Circle. She was also a member of the community Study Club. Edna made many wonderful friends and lived a long and beautiful life. These memories, and countless others will forever stay in the hearts and minds of all of the lives she touched over her lifetime. Blessed be her memory. Mvfh.org